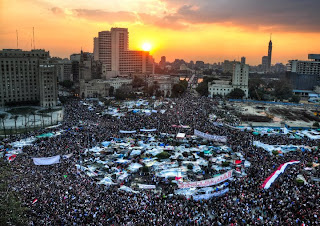 Ok, the next few tweets i'm going to be playing devil's advocate, and assuming Sulieman and Mubarak are sincere. #Jan25 Jan25

Now if they're sincere, there has been no mention whatsoever of a change to the presidential powers. Which is a disaster. #Jan25 Jan25

Meaning that the president, whoever it is, will still maintain supreme control over the Executive, Judicial, and Legislative powers. #Jan25

Which means whoever the president is, he will still have full control over everything, which is NOT acceptable. #Jan25 Jan25

Another issue, is that there is no method of checks and balances between the Judicial, Executive and Legislative powers in & of themselves.

Also, there has been no change whatsoever in heading toward a civil state. The military still reigns supreme in the country. #Jan25 Jan25

Meaning that even if sincere, would the military accept being under control of a civil government instead of a military one? #Jan25

So we've basically reached a point where i'm wondering, should we even bother trying to amend the failed constitution? #Jan25

The constitution has FAR more problems than the ones stated in Mubarak's speech, or even in most people's minds. #Jan25

So assuming sulieman & mubarak are being truthful, how many more problems do we have facing us? What other dirty tricks are in store? #Jan25